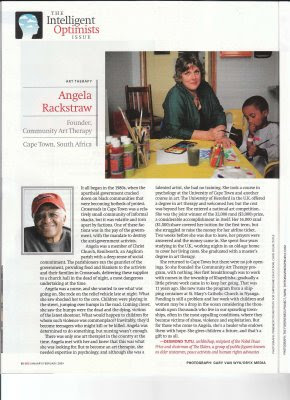 ANGELA RACKSTRAW of the COMMUNITY ARTS THERAPY Programme, Cape Town, S. Africa is featured in the January 2009 issue of ODE MAGAZINE as one of the World's "Intelligent Optimists." as selected by the Most Reverend Archbishop Desmond Tutu.

Angela has organized and encouraged CHALK4PEACE at Cape
Town's St. George's Cathedral for the past three years,
as well as expanding the event to Cork City School Project
in Ireland and the Grahamstown Cathedral in Grahamstown,
S. Africa. We honor Angela for her fortitude, talent,
and spirit...and for bringing her arts therapy programme
to S. Africa; and for sending her healing energy around
the planet. Click on today's Post Title for Ode Magazine's
Tribute to Angela Rackstraw.

The light of the world shines brighter because of her...

Congratulations to ANGELA RACKSTRAW and thank you to
ODE MAGAZINE for recognizing her efforts.
Posted by John Aaron at 3:28 PM