The Museum of Modern ARF...

Dogs have proclaimed MARCH as Modern ARF month.
Shown is the entrance of Modern ARF in late 2004, at the time of
the second "Breaking the Silence" interational exhibition of
political commentary. Frank Fishburne's "Snakes" and Roger Cutler's
"Baghdad Metro Stop" greeted visitors to the museum half a block
from the Kerry/Edwards headquarters in Arlington, VA. The show
contained prescient imagery of what was to come. 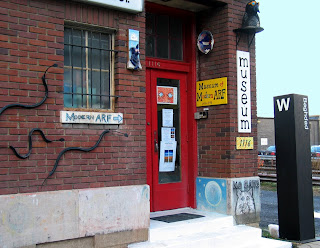