CHALK4PEACE is all over your sidewalk! 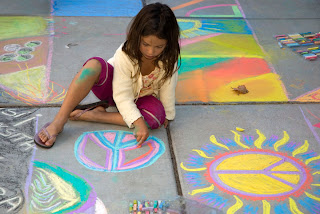 John traveled to Washington, DC on Sunday the 16th, where he
attended the CHALK4PEACE events of the Organization of
American States; and to Virginia, where the Unitarian
Universalist Church of Arlington covered their walkways with
messages of peace. More than 40 countries and 20 states
were represented with drawn flags and symbols at the OAS.
A rough count of "chalkstars" who visited the OAS to leave their
mark was just under 500.

More than a dozen schools chalked it up around the Beltway
on Friday, only to be washed away by the evening's storm.
Weekend events fared better. Barcroft Elementary did a
beautiful job of transforming their parking lot into a giant canvas.
Several schools in Virginia have developed curricula for the
beginning of the school year to lead up to CHALK4PEACE titled
"TEACH PEACE." They will be sharing this wonderful
information with CHALK4PEACE very soon, so that other
schools can prepare their students to better understand more
about the concept of peace. We have received about 500 photo-
graphs so far; and were made aware of events at schools in
Cork City, Ireland and Bethlehem, Israel.
They will appear at www.chalk4peace.org in the coming weeks.
Several California events have already been posted.
Curiously, at the closed up building that used to house the
Museum of Modern ARF, peace symbols in chalk appeared en
masse on the wall where the first chalk painting took place that
led to CHALK4PEACE. The above photo is by Jerry Downs Photography.
Posted by John Aaron at 10:38 PM